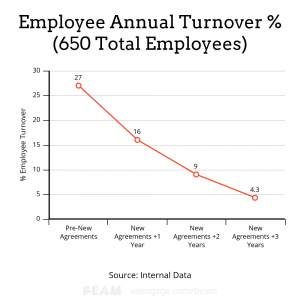 good people. What if most of this effort was a waste of time and money?

It’s a fact that approximately 94% of the outcomes we experience in the workplace, both good and bad, are a function of the systems in which people work, not the efforts of those people.

People really can’t do better than the systems allow them to do. This includes even the “best” people. At work, we basically get what the systems will deliver.

Imagine how frustrating it is for people to work in systems where they cannot be successful in their jobs. Going further, picture how people feel when they are blamed for things over which they have little or no control. Most leaders don’t realize that poor systems are one of the major root causes of high turnover rates.

We know another reason many people leave their jobs is a bad supervisor, manager or leader. Managers don’t realize that many issues with workers aren’t really about the workers, but the systems in which those workers attempt to do their jobs. Now we add to the turnover issues with abusive or micromanagers who don’t know they are managing the 6% when it’s the 94% that need optimizing.

Back to hiring the best people. I’d look for team players and “nice” people first. I’ll surely catch some flack for this but will say it anyway. I’d avoid hiring competitive people. I know. We put competition on a pedestal. But nothing is more damaging to a systems-based company than internal competition. Once you have hired nice people, train them to the robust systems that set them and the company for success.

This is called Systems-Based Transformational Leadership and it creates more value in businesses than current leadership and management models. Why? Because it sets up workers to be successful and happy in their jobs, managers and leaders to understand the power of systems and how to optimize them, and a culture that dramatically reduces turnover and the need to constantly hire “the best people.” It also produces higher quality products and services for less cost. This is value.