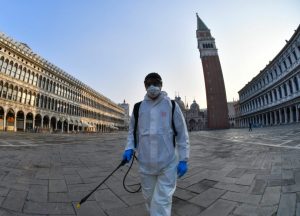 From my friend, Rick, who received the following from two of the doctors at Brigham and Women’s Hospital, Dr. Julie Silver and her friend Dr. Reem Ghalib.

So much confusion, misinformation and denial is bouncing around on social media about the coronavirus that I thought I would try to explain, in plain language, why the experts see this as such an emergency.

You will see the claim online that this virus is a lot like the viruses that cause colds, and that if you get it, it will probably just seem like a bad cold and you are very unlikely to die. Depending on who you are, these statements are probably true. But they are incomplete, and the missing information is the key to understanding the problem.

This is a coronavirus that is new to the human population, jumping into people late last year from some kind of animal, probably at a wildlife market in Wuhan, China. It is related to the viruses that cause colds, and acts a lot like them in many ways. It is very easy to transmit through the respiratory droplets that all of us give off. But nobody has ever been exposed to this before, which means nobody has any immunity to it.

The virus is now moving explosively through the human population. While most people will recover, about 20 percent of the people who catch it will wind up with a serious disease. They will get pneumonia that causes shortness of breath, and they may need hospitalization.

Some of those people will get so sick that they cannot be saved and will die of the pneumonia. The overall death rate for people who develop symptoms seems to be 2 or 3 percent. Once we have enough testing to find out how many people caught the virus but did not develop symptoms, that might come down to about 1 percent, optimistically.

Older people with existing health problems are much more vulnerable, on average. The mortality rate of coronavirus among people over age 80 may be 15 or 20 percent. It appears to have 7 or 8 percent mortality for people aged 70 to 79. Here is the terrible part: If you are a healthy younger person, you can catch the virus and, without developing serious symptoms yourself, you can pass it along to older people. In other words, as the virus spreads, it is going to be very easy to go out and catch it, give it to your grandmother and kill her, even though you will not die yourself. You can catch it by touching a door knob or an elevator button.

Scientists measure the spread of an epidemic by a number called R0, or “R naught.” That number is calculated this way: for every person who develops the illness, how many other people do they give it to before they are cured (or dead) and no longer infectious? The R0 for coronavirus, in the absence of a control strategy, appears to be a number close to 3 – maybe a bit higher or lower, but in that ballpark. This is an extremely frightening number for such a deadly disease.

So, in just 15 steps of transmission, the virus has gone from just one index case to 14.3 million other people. Those 15 steps might take only a few weeks. The index person may be young and healthy, but many of those 14 million people will be old and sick, and they will likely die because they got a virus that started in one person’s throat.

The United States is not at this point yet, with millions infected, as best we can tell. We don’t really know, because our government has failed us. We are many, many weeks behind other countries in rolling out widespread testing, so we don’t really have a clue how far the thing has spread. We do know that cases are starting to pop up all over the place, with many of the people having no known exposure to travelers from China, so that means this virus has escaped into our communities.

We do not have approved treatments, yet. We do not have a vaccine. The only tool we really have now is to try to slow down the chain of transmission.

This can be done. In other words, R0 is not fixed – it can be lowered by control measures. If we can get the number below 1, the epidemic will die out. This is the point of the quarantines and the contact-tracing that you are hearing so much about in the news. But the virus is exploding so fast that we will not have the labor available to trace contacts for much longer, so we have to shift strategies. This has already begun, but we are not doing it fast enough.

It is now likely that the majority of Americans will get this virus. But slowing it down is still crucial. Why? Because the healthcare system has limited resources. We only have about a million hospital beds in America. We have well under a million ventilators. If millions of Americans get sick enough to need treatment, we will have a calamity on our hands. What will happen is a form of battlefield triage, where the doctors focus on trying to treat the young and allow the older people to die.

This is not theoretical. It is already happening in Italy, where people over 65 are being left alone on hospital gurneys to suffocate to death from pneumonia. They basically drown in their own sputum. There is simply not enough medical capacity to take care of them. The United States appears to be about two weeks behind Italy on the epidemic growth curve.

What do we need to do now? We need to cancel all large gatherings – all of them. You have probably seen that the N.B.A. has postponed the rest of its season. Other sporting events, concerts, plays and everything else involving large audiences in a small space – all of it needs to be canceled. Even if these events take place, do not go to them. No lectures, no plays, no movies, no cruises – nothing.

Stay at home as much as possible.Stay out of restaurants. I would cancel any travel that is not absolutely essential. Work from home if you possibly can. You may have to go buy groceries and medicine, of course, but make the trips quick and purposeful. Wash your hands assiduously after you have been in public places, for a full 20 seconds, soaping up thoroughly and being sure to get between the fingers. Sunlight and alcohol will kill the virus.

And please stop passing around statements on social media claiming that the situation is not serious or is being exaggerated. This is a national crisis, and conveying misinformation to your friends and family may put their lives in danger.”